Today Kazan Medical University is a multifunctional multilevel state higher medical educational institution that sees its mission in providing high-quality educational, scientific and clinical activities that correspond to the level of the best domestic and foreign medical schools, based on the development and implementation of innovative technologies, the implementation of an effective model of social partnership between KSMU, society, the health system and the region aimed at improving the health of the population Nia and increase its longevity. 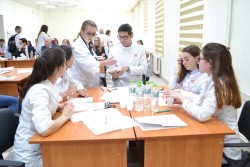