The Peoples' Friendship University of Russia (RUDN University) integrates education, research, creative self-realization, career opportunities for 28,000 students from 155 countries worldwide. RUDN has come out as a multinational university. You may get the degree as a doctor or historian, chemist or ecologist, journalist or engineer, lawyer or agronomist. Moreover, students of all specialties are offered an opportunity to get the diploma in translation. Domestic students have an option of 12 foreign languages (English, Arabic, Spanish, Italian, Chinese, Korean, German, Persian, Turkish, French, Hindi, Japanese), while all international students after a year in Russia speak Russian almost as well as the native

Peoples' Friendship University of Russia competitive advantages are as follows:speakers.  The multi-tiered system of education including undergraduate, graduate, PhD, and residency programs create conditions for quality education at seven faculties, ten institutes and 156 research laboratories. The University implements effective adaptation programs for international students, offers an opportunity to learn Russian making use of uniquely designed training methods and techniques, as well as the opportunity to obtain a degree in English. 18 undergraduate and graduate courses have been accredited internationally. 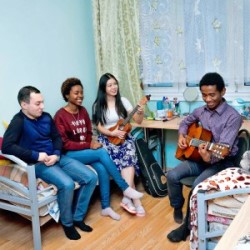 Students of Peoples' Friendship University can do internships at partner universities, and those enrolled in the joint programs have the opportunity to obtain both the RUDN diploma and that of a partner university. 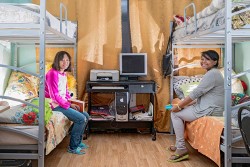 The Peoples' Friendship University student campus is considered one of the best in Russia. Academic and residential buildings are within a hand reach of each other on the territory of 50 hectares close to the forest plantation zone. The out-patient clinic is supplied with modern equipment and offers a full range of medical services. Stadiums, gyms, arenas, tennis courts and a ski center create favorable conditions for sport activities all year round.

Outside classes, the university offers various leisure facilities. The culture and entertainment "Interclub" encompasses 35 artistic groups and other interest units. The quality of education, provided by the University, has been made evident by the success of more than 100 thousand graduates who work in almost every country of the world. The Peoples' Friendship University list of influential alumni includes presidents and ministers, hundreds of well-known politicians, entrepreneurs, scientists, and notable figures in culture. Peoples' Friendship University of Russia has established the world's largest Association of RUDN Alumni and Friends. In 2010 UNESCO awarded the Golden Medal to RUDN for its invaluable contribution towards training specialists for countries with emerging and developing economies. Peoples' Friendship University of Russia has been actively engaged to work on programs and projects of the United Nations Organization and the Council of Europe.