The Amur State University is one of the youngest, perspe 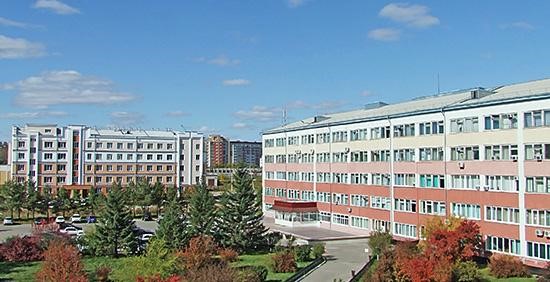 ctive and fast developing universities in the Far Eastern Region of Russia. The university keeps the best traditions of the native higher education, smoothly integrates into the world system of higher education, and explores new trends and technologies in education and science.

The Amur State University is a member of academic innovative consortium in space area. Leading role in university research activity belongs to the research Hi-Tech institute established in 1995 and named as the Research and Education Center (REC). Innovative activity at the university is represented by the innovation-technology center of AmSU. It is responsible for development and production of electronic management systems, circuit plates and training equipment.

The Amur State University opened an affiliated branch of the RAS Institute of Far Eastern studies.

The university runs Programs of Double Degree. Apart from study a main chosen academic field students have a possibility to gain extra qualifications that take two years each. Since 2014 graduate of the university are given the European Diploma Supplement, which is necessary when applying to foreign colleges or finding a job.

We have a great deal to offer students well-developed local infrastructure of the AmSU campus that embraces eight academic buildings, dormitories, libraries, experimental labs, own sports complexes, a swimming pool, several dining places, and a café.

The Amur State University is one of the best far-eastern places of Russia, where each student can get a valuable degree, develop own skills and talents and start a career.

DEPARTMENT OF MATHEMATICS AND COMPUTER SCIENCE

IT-specialist is a prominent position in the third millennium. They comprehensively develop potentials for using the Internet, create new IT-services and techniques for the most advanced telecommunications, build up networks and data-centers for global companies, and protect computers from hackers and cybercriminals. To this end the Department of Mathematics and Computer Science is in great demand of matriculants. Each year the Department offers courses for about 500 students.

Our students are well prepared and develop practical skills in software engineering, computing hardware and networks, information coding and protection methods. Students of the Department of Maths and Computer Science regularly participate and become prizewinners of All-Russian contents, Far Eastern Olympiads, tournaments, and competitions in mathematics and software engineering. Our graduates are in demand in labor market and successful in future careers in businesses of the Amur Region, beyond the region and country.

DEPARTMENT OF ENGINEERING AND PHYSICS

In the rapidly developing modern world engineering sciences have taken popular positions. So as to progress in different spheres from medicine to space exploration, there is a need for young well-equipped specialists. Students of the department contribute to research and science in such fields as creation of new materials, information technologies, medical physics, nanotechnologies.

Department of Engineering and Physics is a leading supplier of qualified staff for such foreground federal projects as “Spaceport Vostochny” and “Power of Siberia”.

In 2015 the department opened the Amur center of flight control that enables wireless communication with astronauts of the International Space Control, small spacecraft and new satellites control.

Much of the success in specialist training is due to the practicum component, including placements in industries and professional bodies of the Amur Region and the Far East, as well as in main institutions and research centers of Russia (Moscow, St. Petersburg, Tomsk, Novosibirsk et al.)

Energy sector is truly considered to be a key and strategically important industry of any country. Thousands of cities and small towns, businesses, factories and plants, millions of people are in need of regular power supply.

Students of the department are involved in development of new safe and ecological technologies of energy area.

Department of International Relations is one of the most prestigious and leading departments at the university.

Students are professionally involved in political, social, economic, demographic, linguistic, cultural, tourist, religious and other processes. During the study they have compulsory modules of two foreign languages (Chinese and English).

Due to the geographic proximity to China the most popular courses among our entrants are those connected with Chinese language. Each year about 500 students learn Chinese. The Department holds an annual festive contest of Chinese language and culture.

Our graduates successfully work in local government, ministerial bodies of the Amur Region, police authorities, mass media, private sector in and beyond the country, as well as in import and export organizations, and customs.

DEPARTMENT OF DESIGN AND TECHNOLOGY

This Department is the oldest one at the university. It started in distant 1975. Now it is one of the most prestigious, up-to-date, and creative departments at AmSU.

Students and staff of the department regularly participate and win prizes of different All-Russian and international contests, competitions and festivals.

Our graduates work as designers in building and manufacturing companies, architectural and designer studios that feature interior and landscape design, furniture; they also work in polygraphic and advertising companies, and in printing-offices.

Department of Social Sciences is one of the largest at AmSU and its students are very active in social life and culture. The faculty trains students to gain knowledge in psychology and solve questions of socialization and personal adaptation. Students will also learn the aspects of counselling and how to provide psychological aid.

The department has its own academic and scientific subdivisions like chairs, a lab of practical psychology, Center of Social Studies, Center of Archeological Research.

Working closely with academic staff, our students take active part in scientific conferences, fora and seminars. Special attention is given to prospects of volunteer movement, including charity actions for elderly people and orphans.

Economics Department is one of the most prestigious at AmSU. Economic Department prepares students to enter a career in government bodies, banks, insurance and commercial organizations, audit and consulting companies. It provides a wide range of degree and non-degree courses in different economic areas.

The department welcomes researchers and scholars from the Far East and other guest speakers from the leading companies, financial institutions, a board of treasury, tax authorities, and banks to deliver lectures for students on a number of important areas of economics.

Law Department is traditionally popular due to its active and effective work with students, ultimately helping them reach their potential and be successful in entering employments within the region and country.

Law Department keeps in touch with other Russian universities, law enforcement authorities, investigative directorate, police and other law bodies. Thereby students have an opportunity to gain valuable expertise in their chosen field.

In 2013 there were opened up preparatory courses. They are specially designed to help international students meet the entry requirements, including Russian Language and other relevant subjects (foundations of mathematics, social studies, etc.) within the chosen bachelor’s or master’s program.

Department of further education gives an opportunity for gaining advanced qualifications or professional skills in other areas distinct from the degree being obtained. Graduates are given relevant certificates. Further professional programs take 1 or 2 years of study.

Graduates of the department are highly competent in legal issues, familiar with current legislation and problems of market economy. They are capable to protect human and civil rights.