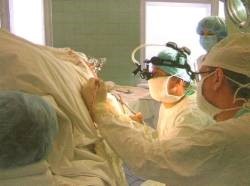 Nizhny Novgorod State Medical Academy (Nizhgma) - one of the oldest and most prestigious medical universities in Russia, have 90-year history and glorious traditions.

In 1920, government has taken the decision to open trelevant faculties in universities of county-level cities for the preparation "medical personnel of the workers 'and peasants'

In October was created the first research student neurological club. In the first graduation was released 26 health officers, and in 1931 - 24 –surgeons. In 1936, the elected council of the circles Science Student Society (NSO).

Before the Great Patriotic War in the institute worked 38 professors, 25 associate professors, 130 assistant professors in 18 theoretical and 18 clinical departments, placed in well-equipped hospitals.

In 1940-1945 University headed by Associate Professor (later - professor) KG Nikulin, his Deputy in scientific and educational department worked Professor G.J GorodisskyOn their shoulders fell the leadership of the Institute during the war.

The military situation has caused the revision of curricula, two dormitories was given to the city, but production of doctors increased. "Now it seems incomprehensible how the department could provide theoretical learning process, having only one or two classrooms.. In barely   heated building, half-starved students learned purposefully, stubbornly, with a high sense of responsibility. "

As time went on, University achieved more, expanded  the material base, improved the learning process. The university and staff received numerous awards and worldwide recognition.

June 15, 1994 the institute received status of the Academy.

There is dental clinic - the main production base of the Faculty of Dentistry.. Centerf or practical skills with modern phantoms and simulators helps students in the daily training of practical skills.

The annual rankings show that Nizhgma consistently winning the top five medical universities in the country. The total number of foreign students at the academy each year is growing,and this year there are 615 people from 30 countries in Africa, Asia, Oceania, 50 of them in doctors postgraduate training phase.

University is involved in international student exchange and numerous prestigious international projects, has a long-term relationship with the medical faculties of the universities in Duisburg-Essen (Germany) and Nice-Sophia Antipolis (France), the Cleveland Clinic (USA).

Each hostel is equipped with a canteen and cafe with provisions of kitchen and dining hall on each floor.

0 # Request for a scholarship — Mohamednur Abdi 2017-12-08 04:17
I am a kenyan aged 19 and have a passion to pursue the field of medicine yet my parents cannot manage to afford . I kindly request from you to grant me a chance to pursue that course and expose my ambiquous talent .
I stay adamant to hearing from you. Thank you.
Reply
0 # Radiology — Aaminah Fatima 2018-03-04 10:38
I have completed my general medicine diploma from India now I want to study master in radiology. Can you help me with the admission procedure
Reply
Refresh comments list